The Secretary General of the ECOWAS Parliament, John Azumah, has reiterated the commitment of the ECOWAS Parliament to promote integration, peace, security, and stability in the West African Region
According to him, the ECOWAS Parliament is ready and willing to work closely with all stakeholders, including Civil Society Organisations and media.
Mr Azumah gave this assurance when a delegation from the West Africa Parliamentary Monitoring Organisations Network, and the African Parliamentary Press Network (APPN) paid a courtesy call on him in Abuja.
The Secretary General assured the group that the ECOWAS Parliament, also known as the Community Parliament, is always happy to welcome citizens and organisations that shows interest in it work and progress.
The ECOWAS Parliament is one of the Institutions of ECOWAS. It is the Assembly of Peoples of the Community serving as a forum for dialogue, consultation and consensus for representatives of the people of West Africa with the aim of promoting integration.
It was established under Articles 6 and 13 of the ECOWAS Revised Treaty of 1993. The initial Protocol establishing the Parliament was signed in Abuja on August 6, 1994. It provided for the Structure, Composition, Competence and other matters relating to the Parliament.
The Parliament is composed of 115 seats. Each Member State shall have a guaranteed minimum of five seats. The remaining 40 seats shall be shared on the basis of population.
The objective and vision of the ECOWAS Parliament are to strengthen representative democracy in the Community; contribute to the promotion of peace, security, and stability in the West African Region; to inform and sensitise the population on issues of integration; promote and defend principles of human rights, democracy, the rule of law, transparency, accountability and good governance; promote the practices of accountability; contribute to the efficient and effective implementation of objectives and policies of the Community among other objectives
The delegation led by Mr. Gilbert Borketey Boyefio, Programmes Manager, Parliamentary Network Africa (PNAfrica), the secretariat to both the West Africa PMO Network and the APPN, expressed gratitude to the warm reception granted the delegation.
He briefed the ECOWAS Parliament secretariat on the ongoing Open Parliament Engagements and Networking in West Africa (OPEN West Africa) Project, which seek, among other things, to support and engage PMOs in efforts to improve parliamentary transparency, including the development of minimum transparency standards for parliaments, indices of parliamentary transparency and open data standards.
He indicated that the group look forward to working closely with the ECOWAS Parliament to develop a tool that will assess openness (transparency, accountability, responsiveness, and level of citizens participation in parliamentary work) in West African national Parliaments, as well as the ECOWAS Parliament and PAP. The findings of the Index will be published and also used to engage national parliaments and the two regional parliaments- ECOWAS and PAPs- and identify ways to improve openness.
As Media is an important partner in projecting the good work of Parliament, the group introduced to the ECOWAS Parliament Secretariat the African Parliamentary Press Network (APPN). The APPN is a Network of African journalists and information officers reporting from national, sub-regional and continental Parliaments.
The Network was established to promote parliamentary openness and a cordial working relationship between Parliament and the media. The Network strongly believes that a well mobilised and resourced press corps or galleries in all African parliaments will set the stage for the work of African Parliaments, including the Pan-African Parliament, to be made visible to the people of Africa.
According to Mr Boyefio, “This triangular relationship between Parliament, CSOs and Media helps to bring Parliament closer to the citizenry, thereby making them active participants in how they are governed.
“We look forward to working with you to champion press freedom and ensuring that national Parliaments in the ECOWAS provide an enabling environment for the media to thrive in their coverage of parliament”.
The delegation took the opportunity of the visit to express its excitement about the intention to directly elect members of the ECOWAS Parliament from the various member States, rather than the current status quo.
“We strongly believe that this move will not only ensure consistency and retention of institutional memory in members of the ECOWAS Parliament but will also ensure that members are dedicated and committed fully to the work of the ECOWAS Parliament.
To this end, the PMO Network and the APPN are fully committed and ready to assist the ECOWAS Parliament to educate African citizens on the direct election of members to the ECOWAS Parliament”.
Members of the delegation included Oluchukwu Ibekwe, Chairman of the APPN Steering Committee and the Dean of the Nigeria Caucus, Vivian Idepefo, Organiser Nigeria Caucus, Raphael Oni, General Secretary, Nigeria Caucus and John Martey, PNAfrica.
The ECOWAS team was made up of Mr John Azumah, the Secretary General, Dr Mohammed Kabeer Garba, Bureau and Strategic Planning Manager, and K Bertin SOME, Director of Parliamentary Affairs and Research.
The delegation later had separate interactions with Uchenaa Duru, Acting Chief Communications Officer.
E-levy bill: Idea behind tax is …
Minority stages walkout during consideration of …
Government is blackmailing Ghanaians to accept …
Couple aged 60 welcomes triplets after 30-years …
E-levy homegrown solution to address economic …
Over 10 houses and churches demolished in …
Money Lab: What is Final dividend?
It is very dangerous to open …
The Multimedia Group
Advertise With Us
Contact Us
Terms of Use
Privacy Policy
Joy 99.7 FM
Adom 106.3 FM
Hitz 103.9 FM
Asempa 94.7 FM
Luv 99.5 FM
Nhyira 104.5 FM
Joy News
Adom TV
Joy Prime
MultiTVWorld.com
Adom TV (Audio)
Joy News (Audio)
YouTube
Facebook
Twitter
Instagram
LinkedIn
Infographics
Elections
Habitat Fair 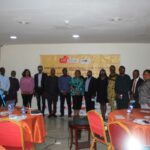