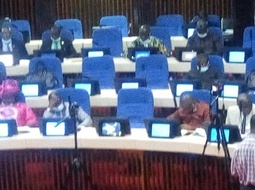 The thirty-sixth plenary sitting of the Fifth Parliament (Third Session) of the Second Republic of Sierra Leone was snappy but engaging with Honorable Solomon Sengehpoh Thomas (Deputy Speaker of Parliament) presiding in the absence of Hon. Dr. Chernor Abass Bundu.

The atmosphere in the Chamber was discomforting due to the failure of the House’s cooling system. Some Members of Parliament (MPs) were seen profusely sweating while others help themselves cool off with pieces of paper. The galleries were empty except for the presence of some of the ever-consistent and committed members of the Parliamentary Press Gallery.

On the Order Paper (OP), House Leader Honorable Mathew Sahr  Nyuma in accordance with provisions of Section No. 118.7 of the Constitution of Sierra Leone Act No.6 of 1991, laid gifts (one laptop computer, one printer, one 10 cartridges, ten solar lights, ten solar power banks, five electric fans, one seventy inches tv, one projector, and one projector screen) from the Chinese Embassy for the use of the Ministry of Youth Affairs.

Also, Hon. Abdul S. M. Conteh Chairman Legislative Committee tabled a report on the bill entitled, “The Medical Examiners Act, 2020” for Committee Stage and Third Reading. Unfortunately, the preceding stages of the bill were not reached due to the prevailing situation of   the “Wellbeing extremely uncomfortable for MPs.”

As pertinent as always, the issues can be cataloged as follows:

Technically, the Air Conditioning system is still a huge challenge and continued to be an impediment to smooth plenary sittings.

The Ministry of Foreign Affairs is under indirect instruction to table details of the gift of a fleet of vehicles donated to it. Similarly, the issue of the Chinese missing rice for which the Minister and cohorts were exonerated but the rice not recovered was raised in the context of some Government MDAs receiving gifts for and on behalf of Sierra Leoneans and not giving account (declaring) on them to Parliament, contrary to law.

Interestingly, there was cross-party (SLPP/APC) support on the issue with Hon. Dickson M. Rogers (Government Whip) supporting Hon. Hassan Sesay (APC Whip) over what is a seeming embarrassing issue of missing donor rice, etc. Compliance with Section 118.7 is yet to be fully respected by MDAs. House Leader, Hon. Nyuma says a strong memo is in effect to wit and a violation is tantamount to contempt of Parliament.

The actual legislative scrutiny of the ‘Medical Examiners Act, 2020’ was not done due to the curtailing of the Committee Stage practice and procedure as initially raised by Hon. Daniel Koroma.

The issues of the COVID-19 and resurgence of Ebola in Guinea, Conakry was registered by Hon. Daniel Koroma suggesting that the House invites relevant MDA Heads to tell the people of the country through MPs, on updates on how the country stands on COVID-19 (vaccines, border measures, etc.).

House Leader, Hon. Nyuma also briefed the House on the reason for the absence of the Speaker, being that Hon. Dr. A.C. Bundu is Chief Envoy to Guinea to discuss bilateral issues of land border closure and reopening among other issues (medical, security, regional integration, etc). It was agreed that upon Mr. Speaker’s return from Guinea, the subject of summoning or inviting the Health and other Ministers to brief the House on the level of preparation for an eventual Ebola re-emergence in Sierra Leone and relevant issues.

Presiding Speaker, Hon. S.S. Thomas ordered that top officials of the Health and Sanitation, Internal Affairs Ministries, NaCOVERC, etc are to brief the House by the next sitting on the level of response to COVID-19 and preparedness for Ebola.

Hon. Dr.  K.K. Yumkella, NGC party Leader cited concerns about porous borders and a serious fire incident at Yelie Boya Island in his constituency, also echoing concerns on the issue of expenditure in the Office of the President but not stating the obvious (revelations by the Africanist press) with regards to that of the Office First Lady citing Section 93.2.3. 6 saying it is but fitting for the Government to be giving an opportunity to tell their facts of their own side of the story. He called for hearing and documentations but House Leader, Hon.  Nyuma responded by saying, “we don’t deal with allegations here we deal with facts, follow the procedure.”
Hon. Alice J. Kumabeh reported a serious incident (depositing of huge toxic waste in Taiama River) contaminating and making the water unusable, killing fishes, destruction of farmland, and the outbreak of diarrhea among her people due to mining activities happening in unknown locations. She reported that twenty-five villages, eight thousand people being affected, etc. Hon. S.E Lamina Chairman Mines and Mineral Resource Committee/ Leader C4C party confirmed personal receipt of the report and instructed the MP to assist with the name of mining companies.

This issue reignited the need for government institutions to obtain and submit to Parliament Mining Lease Agreement as earlier espoused by Hon. CRM Bah, Leader APC party.
A PCMP triggered the attention of MPs on the environmental pollution from Gold Mining Companies in his Chiefdom asking that the National Minerals Agency (NMA) provide records on mining companies that are operating upstream.  A Select (Mines, Water Resources, Defense, Environment and coopted) Committee has been taxed and agreed to be given resources to embark on an oversight visit to the area to get first-hand information on the contaminants and report back to the House, following a motion moved by Hon. A.J. Kumabeh and carried to ascertain the reason for the contamination of the said river.

The issue of some Ministers’ treatment (busy to see MPs) was gimmicked in the delayed relieving of Deputy Internal Affairs Minister, L. L. Leema from the Well after his proposed bill failed to sail for the second time.

The issue of promotion policy in the Sierra Leone Police Force was raised by the Hon. Abdul Karim Kamara, questioning the rationale behind the reintroduction of the old ranking system. He also requested that Government buses be made available to ferry people home during the curfew rush hour to curb the spread of COVID-19 among commuters.
Hon. Billoh Shaw pleaded with NaCOVERC for the curfew to be shifted from 10:00 pm to 12 pm, to bolster trade (food sellers) and livelihoods. Mr. Speaker however ordered the Committee on Transport to look into the issue whereas, on the curfew, Hon. Nyuma said, “I have my reservations on the curfew shifting because our lives are precious. For now, COVID-19 and Ebola let’s wait after the hearing with the Health Minister and NaCOVERC update on new COVID-19 variant and state of preparation for Ebola.”

The Mines Committee report on findings on China Kingho Mining Limited alleged unconstitutional shipment of iron ore was not laid in Parliament for ‘understandable reasons’, according to the Leader of the main opposition. The House Speaker said the presentation of the Head of NMA (Julius Mattai) on radio filled him with consternation. “I could not imagine the kind of things he said. Let the head of NMA   come and listen to some sense, such submissions should not come from him, Parliament is the keeper of the public purse, we will not accept what he said. Let him come along with the Minister of Mines on Tuesday.”

An issue of arm-robbery in Kambia in the midst of curfew was used by an NGC MP to question the necessity of the curfew.

The PC of Bumpeh Gao Chiefdom was reportedly sick (a euphemism) and to be taken on an ancestral journey on the 5th March 2021, Hon.  Charles Abdulai informed the House.
Coming up, Government motions on financing agreements, lands, cyber bill, wages commission act, etc. 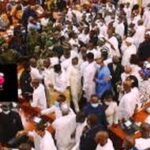