The Parliamentary Network Africa (PNAfrica) has established a dedicated desk to work and collaborate with organisations, Corporate Ghana and individuals, who are interested in bringing a Private Member’s Bill (PMBs) to Parliament.
According to PNAfrica, their decision to establish the PMBs desk was informed by “the strong quest of participants for an entity that will be dedicated to working closely with Parliament to ensure that PMBs, once laid in Parliament, get all the needed attention from Parliament.”
Participants made this call during and after PNAfrica’s webinar to commemorate the journey so far on the adoption of a motion to start admitting the Private Members’ Bill in the Parliament of Ghana.
The 16th of July, marked exactly one year since the 7th Parliament of Ghana adopted a motion to start admitting Private Members’ Bill (PMB).
This brought to an end, the old regime where only the Executive arm of Government had the sole prerogative to introduce Bills in Parliament.
The PNAfrica says the dedicated desk would ensure that the PMBs that are placed before Parliament do not offend Article 108 “and will not be categorized as what the British call ‘a money bill’.”
It added that the introduction of the Private Member’s Bill is a welcome intervention in Ghana’s democracy as it will broaden citizens’ and groups’ involvement in the decision-making and policy formulation processes of the country.
“The introduction of PMB has now created the enabling platform for individual Members of Parliament (MPs) who are not Ministers of State to introduce or initiate bills on the floor of the House for consideration.
“It also affords non-government officials, private citizens, and Civil society Organizations (CSOs) the opportunity to work with a Member of Parliament to initiate a Bill,” it said.
The PNAfrica, however, bemoaned that despite it being more than a year since the bill was passed, only one bill under the PMB has successfully been passed.
“Unfortunately, since the adoption of the motion to admit Private Members’ Bill last year, only one law has been passed by Parliament which was introduced and co-sponsored by Hon Ras Mubarak.
“There are, however, indications that several PMBs are in the process to be introduced in Parliament,” it stated.
The PNAfrica webinar sought to bring to the attention of citizens, CSOs, Development Partners, and the Diplomatic Community the opportunity to use PMBs to amend existing legislation or introduce new legislation to improve the country’s governance architecture and enhance sustainable development.
It also provided the platform for citizens to be sensitized on the parliamentary procedures involved in the introduction of the Private Members’ Bill.
In addition, it offered the opportunity for experience sharing on the use of Private Members’ Bill by Parliamentary Monitoring Organization (PMO) in Africa.
About PNAfrica
Parliamentary Network Africa (PNAfrica) is a civil society parliamentary monitoring organization (PMO) promoting Open Parliaments across Africa.
It achieves this through strengthening parliamentary institutions, convening networks of PMOs in Africa, supporting media and access to information, and ensuring accountability, inclusion, and promoting livelihoods.
PNAfrica, has over the years been involved in convening and strengthening networks that seek to engage national Parliaments in Africa towards enhancing transparency and encouraging citizens’ participation in the parliamentary process.
Living Standards Series: Man puts building …
A-G and EC’s attitude towards …
BMPS Talk Show: Joy Prime to …
Abuse of public office should attract …
Free SHS policy has compromised quality …
Verdict on Parliamentary quorum shows judicial …
‘There is so much wastage, politicians …
Deputy Speaker can vote and form …
The Multimedia Group
Advertise With Us
Contact Us
Terms of Use
Privacy Policy
Joy 99.7 FM
Adom 106.3 FM
Hitz 103.9 FM
Asempa 94.7 FM
Luv 99.5 FM
Nhyira 104.5 FM
Joy News
Adom TV
Joy Prime
MultiTVWorld.com
Adom TV (Audio)
Joy News (Audio)
YouTube
Facebook
Twitter
Instagram
LinkedIn
Infographics
Elections
Habitat Fair 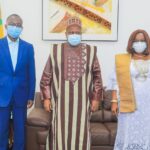