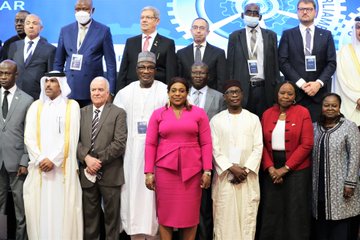 “Understanding the terrorist threat in Africa: new challenges and necessary measures” is the theme of the Parliamentary Conference on Terrorism held from 30 to 31 March 2022, in Doha, Qatar. Organized by the United Nations Counter-Terrorism Office, this meeting aims to find appropriate solutions, particularly parliamentary ones, to the new threats hanging over Africa and hampering its development.

For two days, March 30 and 31, the presidents of the continent’s parliamentary institutions worked on the scourge of terrorism and made concrete proposals to overcome this hydra.

In an increasingly uncertain security context, the sharing of experience on the basis of lessons learned from the fight against existing and emerging terrorist threats on the African continent was therefore a boon to better tie up proposals in order to curb this evil. redundant.

Several speakers suggested that States “meet the needs of populations affected by crises, intensify sub-regional and continental cooperation on issues related to defense and security and adopt inclusive approaches with the involvement of society. civilians and NGOs. To this, it would be necessary, according to them, to adopt legislation to new threats.

But in the meantime, the urgency would be to act in solidarity, between African States, to lead a coordinated fight against the common enemy, terrorism.

Togo, which took part in this important meeting, was represented by Ms. Yawa Tsègan, President of the Togolese National Assembly. This Thursday, Ms. Tsègan, during a high-level panel, shared Togo’s opinion and experience in the field of terrorism.

This panel, composed of her peers from the Democratic Republic of Congo, Mauritius, Morocco and Guinea-Bissau, the President of the Togolese National Assembly presented a communication on “Terrorist threats in Togo and the African continent: necessary measures to deal with it”. A sequence of actions carried out by his country, under the leadership of the Head of State, Faure Gnassingbé

Appointment is then made for next April during which will be organized a world summit on the question.