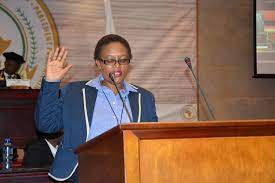 The Senate of Lesotho has re-appointed Hon Senator Nthati Bereng to be part of the delegation to the Pan- African Parliament (PAP) to represent the country’s interest in the Continental legislative level.

This follows an appeal made by the Lesotho Caucus of the African Parliamentary Press Network (APPN), to the President of the Senate to consider re-appointing the Honourable Member who had previously excelled at her duty.

A letter signed by the Clerk to the Senate, Adv. Tseliso Molise, and addressed to the APPN Lesotho, confirmed the re-appointment of the Senator to the PAP by the President of the Senate.

“Reference is made to your letter dated 16th January 2023. Please note that the Hon President of Senate has re-appointed Hon Senator Nthati Bereng to represent us into PAP. Kindly afford her the necessary assistance she may require,” the letter indicated.

“So, Senator Nthati Bereng is the long time Senator, and her time at PAP had to end with the end of life of the then 10th parliament of Lesotho. We felt she was getting to know and appreciate PAP ecosystem better. The President even knows her.

“She is also good with the media, so these are some of the factors that have inspired our request for her re-appointment,” Thoboloko Nts’onyane, Dean of the Lesotho Chapter of the APPN indicated in an interview.

The Network is managed by a Secretariat hosted at the headquarters of the Parliamentary Network Africa (PNAfrica) in Accra, Ghana.

The Network has expanded from having membership from 12 to 28 African countries from the end of the year 2021 to the end of 2022. It aspires to further expand its membership to cover at least 80 percent of the continent by the end of 2023.