Madam Esther Tawiah, Executive Director, Gender Centre for Empowering Development (GenCed), has advised gender-based Civil Society Organizations (CSOs) to strengthen their relations with female Members of Parliament (MPs) to enhance gender equality policies and legislation.
She explained that gender issues were cross-cutting and as such there was the need to expand the advocacy beyond the Gender Caucus to other Committees of Parliament.
“This is the mistake a lot of us doing gender work make…We assume that because there is a Gender Caucus, they should be able to understand all the gender issues,” she said.
Madam Tawiah gave the advice at the maiden seminar on Gender Advocacy in Parliament, organised by the Parliamentary Network Africa (PN Africa) at Parliament House, in Accra.
PN Africa, is a civil society parliamentary monitoring organization working across Africa to promote open Parliament.
Madam Tawiah also emphasized the need to mainstream gender matters at all the various Committees of Parliament since gender issues cut across all the facets of society.
She said CSOs working on gender need to understand the parliamentary process to be able to make necessary impact in terms of advocacy.
She urged the CSOs to sustain their engagement with the female MPs to ensure better parliamentary activism.
Mr Sammy Obeng, Executive Director, Parliamentary Network Africa in his comment stated that even though women make up the majority of the Ghanaian population yet their voices and that of girls are under-represented.
He, however, stated that the situation seems to have a global dimension, which trickles down to the local parliaments.
Citing an instance, Mr Obeng said after the 2020 general elections in Ghana, the number of Women in Parliament worldwide was about 25.5 percent, meaning a quarter of women world over are women.
Parliamentary statistics show that there is growth in women representation from what happened in the past.
However, in the Ghanaian contest, only 40 out of the 275 MPs are women, constituting about 15 percent of all the members, which is far less than the global average of 25.5 percent.
Mr Obeng further quoted the Inter-Parliamentary Union, the global association of all parliaments, which he said had said that it would take not less than 50 years to have any dream of gender parity in parliaments worldwide.
“So, if at25.5 percent the anticipation is that it would take 50 years for this happen, then, we can very much appreciate how long it may take to have any semblance of what we are looking for in the Ghanaian contest,” he added.
Pix show Madam Esther Tawiah, Executive Director, Gender Centre for Empowering Development speaking at a seminar on Gender Advocacy in Parliament.


Is suicide a sin ? I an answer please, that’s the only option I have now
Flint Lions is ma name ” Oh for me this is just a tip of her career going through her…
Congrats daddy. Weldone
Congratulations 👏👏👏🎉🎉🎉 to you my sweetheart, you have indeed make us proud once again, I believe this is the beginning…
People sit down and fabricate that? Is GNPC about politics or about working exploring and bringing value to the nation… 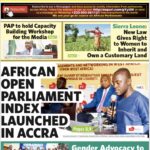